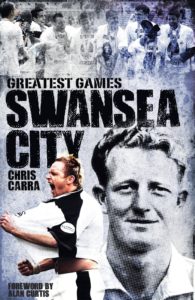 “Selecting 50 great games from 100 years of history is no mean feat! However Chris Carra has come pretty close to the list of games that all of us Swansea City fans would choose. There can be few clubs with a more colourful history than the Swans and this book records some of the club’s greatest moments on the pitch. This wonderful trip down Swansea City’s memory lane is essential reading for the Jack Army, of all ages and generations!”
– Kevin Johns, Swansea City club chaplain
“From the rainy nights on the North Bank, to the epic cup-raising glory days at Wembley, this fascinating, well-researched and highly entertaining journey through 50 of Swansea City’s finest games is a magnificent read for all members of the Jack Army. If you follow the Swans, you MUST own this book!”
– Mark Rees, South Wales Evening Post
— 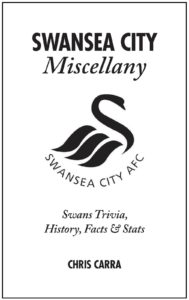 The Swansea City Miscellany is a compendium of stats, facts, history and trivia about Swansea City FC. It’s endorsed by the club and has a foreword from club chairman Huw Jenkins. From the back of the book:
Swansea City Miscellany collects together all the vital information you never knew you needed to know about the Swans. In these pages you will find irresistible anecdotes and the most mind-blowing stats and facts. Heard the one about the Swans striker who was sent off after zero seconds? How about the keeper who played a full game up front? Or why Swansea City have a strange link with a bustling New York neighbourhood? Did you know that the Swans broke the record for the longest Premier League match ever? Which legendary manager penned his own book of sports-influenced poetry? And what a great fantasy team you can make up from all the Joneses that have played for the club? All these stories and hundreds more appear in a brilliantly researched collection of trivia – essential for any Swans fan who holds the riches of the club’s history close to their heart.
— 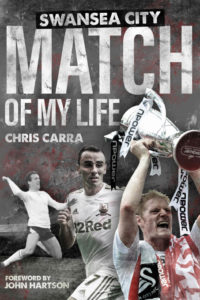 From the back of the book:
Sixteen Swansea City legends tell the stories behind their favourite games for the club – allowing Swans fans of all ages to relive these magical moments through the eyes and emotions of the men who were there, playing for the white shirt. From Alan Curtis’s jaw-dropping first goal in the First Division to James Thomas’s epic survival hat-trick in 2003, here are the stories from the players that created these moments. Alan Tate recalls his tales of the Championship play-off final, Lee Trundle remembers the 2006 Football League Trophy victory and John Toshack selects a game he watched entirely from the sidelines – the promotion-winning match against Preston North End in 1981. Vetch legends Mel Nurse, Leon Britton, Wyndham Evans and Roger Freestone also turn in characteristic star performances, winding back the clock to relive treasured memories of the Match of Their Lives for the Swans.
—

The Bluffer’s Guide to Fitness